Thanks to Tyler Cowen.

Thanks to Linda Stein.

Here is an excellent introduction to cognitive-behavioral therapy (CBT) for depression, centering on a Stanford psychiatrist named David Burns. I was especially interested in this:

[Burns] currently draws from at least 15 schools of therapy, calling his methodology TEAM—for testing, empathy, agenda setting and methods. . . . Testing means requiring that patients complete a short mood survey before and after each therapy session. In Chicago, Burns asks how many of the therapists [in the audience] do this. Only three [out of 100] raise their hands. Then how can they know if their patients are making progress? Burns asks. How would they feel if their own doctors didn’t take their blood pressure during each check-up?

Burns says that in the 1970s at Penn [where he learned about CBT], “They didn’t measure because there was no expectation that there would be a significant change in a single session or even over a course of months.” Forty years later, it’s shocking that so little attention is paid to measuring whether therapy makes a difference. . . “Therapists falsely believe that their impression or gut instinct about what the patient is feeling is accurate,” says May [a Stanford-educated Bay Area psychiatrist], when in fact their accuracy is very low.

When I was a graduate student, I started measuring my acne. One day I told my dermatologist what I’d found. “Why did you do that?” he asked. He really didn’t know. Many years later, an influential psychiatrist — Burns, whose Feeling Good book, a popularization of CBT, has sold millions of copies — tells therapists to give patients a mood survey. That’s progress.

But it is also a testament to the backward thinking of doctors and therapists that Burns didn’t tell his audience:

–use the mood scores to measure the effects of different treatments

Three cheap safe things. It is obvious they would help patients. Apparently Burns doesn’t do these things with his own patients, even though his own therapy (TEAM) stresses “testing” and “methods”. It’s 2013. Not only do psychiatrists and therapists not do these things, they don’t even think of doing them. I seem to be the first to suggest them.

Thanks to Alex Chernavsky.

Thanks to Alex Chernavsky.

Thanks to Casey Manion and Adam Clemens.

Thanks to Allan Jackson and Casey Manion.

For many years I have used the services of Heart Watch to measure my cholesterol and other health-related things, such as HbA1c. The couple that runs Heart Watch, Sandy and Glen, travels up and down California. I was able to get tested only every three months. Feeling that this was inadequate, just as I did, a man named Karl Corbett recently started a business called My Heart Watch that allows much more frequent tests in the Bay Area, at similar price. My Heart Watch uses the same portable testing devices as Heart Watch.

The Berkeley location is almost across the street from Whole Foods. I signed up online (I was the first person to use their online sign-up service), which was very convenient.

Corbett told me that he greatly improved his cholesterol numbers by changing to alternate-day fasting improves my HbA1c, I can ignore what clinical trials say about it.

Before writing this post I spoke to Corbett about getting discounted testing in return for publicizing My Heart Watch.

Thanks to Dave Lull.

Thanks to Jazi Zilber and Phil Alexander. 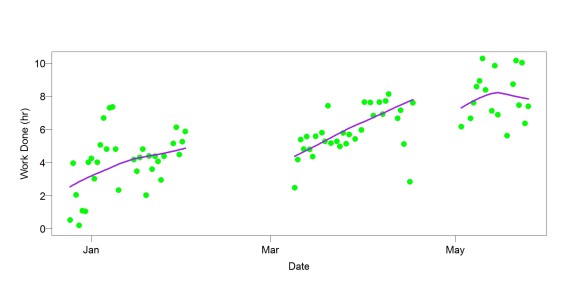 This graph shows how much work I did in early 2013 (one point = one day). It gradually rose from about 2 hours/day to about 8 hours/day. I did not literally get to 8 hours/day because some tasks got counted extra. For example, one minute of Chinese counted as 2 minutes and one minute of book writing counted as 1.5 minutes. The data is in three blocks because sometimes I didn’t use the tracking program (e.g., due to travel).
END_OF_DOCUMENT_TOKEN_TO_BE_REPLACED

Thanks to Bryan Castañeda and Andy.

In conjunction with our upcoming QS Europe Conference in Amsterdam on May 11/12, our friends at BodyMedia have agreed to donate a complete personal SenseWear System (retail price $2,500), a state-of-the-art wearable sensor that allows raw data output. That’s going to be our prize. So if you have good questions, we can supply you with a way to collect the data.

The best answer wins the sensor.

Thanks to Peter McLeod, John Batzel and Joseph Sinatra.

The first Quantified Self meetup was held at Kevin Kelly’s house in 2008. Tim Ferriss has posted his notes from that meeting. I was one of the speakers and his notes show how much I repeat myself.

Inside Tracker sells blood panels — for example, 20 things measured in your blood (e.g., hemoglobin, magnesium, Vitamin D). It was founded in 2009 in Boston, Mass., by Gil Blander, a biology Ph.D., and two other people. They started offering the service in late 2011. Their main customers are athletes (20% professional, 30% amateur) and many Quantified Selfer’s (20%). I recently interviewed Dr. Blander:

What have you learned from the data you’ve collected?

Around 60% of the population has low Vitamin D.[What’s low Vitamin D?] As of today, if you look at the ranges of the diagnostic companies, they are saying that everything below 30 ng/ml is low Vitamin D. We are giving you your optimal zone based on age, gender, athletic activity and ethnicity. We also compare you to your peers. END_OF_DOCUMENT_TOKEN_TO_BE_REPLACED

Thanks to Paul Nash and Adam Clemens.

Thanks to Bryan Castañeda and Dave Lull.