At my Quantified Self talk I described data that suggested butter improved my mental function. During the question period, a cardiologist in the audience said something about me killing myself — butter is unhealthy. The usual view.

I said I thought the evidence for the usual view was weak. He said, “The Framingham studies.” That was epidemiology, I said. It is notoriously hard to understand. My data was from something like an experiment. Much easier to understand. (And the Framingham study is a terrible example of the supposed evidence. To quote from it: “In the period between the taking of the diet interviews and the end of the 16-year follow-up, 47 cases of de novo CHD developed in the Diet Study group. The means for all the diet variables measured were practically the same for these cases as for the original cohort at risk.”) He replied that the reduction in heart disease in recent years was more support for the usual view. I said the recent decline in heart disease could have many explanations other than a reduction in animal fat intake. Many things have changed over the last 20 years.

There is epidemiological evidence that saturated fat is bad, yes, but it is not the Framingham study nor the recent decline in heart disease. And it really is difficult to interpret. The butter-is-bad interpretation could easily be wrong. The obvious problem is that, after people are told butter is bad, people who try hard to be healthy avoid butter. And they do a lot of other things, too, to be healthy. So butter consumption ends up confounded with a dozen other variables believed to affect your health. When I was growing up, my parents avoided butter because margarine was much cheaper. So butter consumption is confounded with income, another problem.

My tiny experiment, whatever its problems, was much easier to interpret.

On Tuesday I gave a talk called “Arithmetic and Butter” at the Quantified Self meeting in Sunnyvale. I had about 10 slides but this one mattered most: 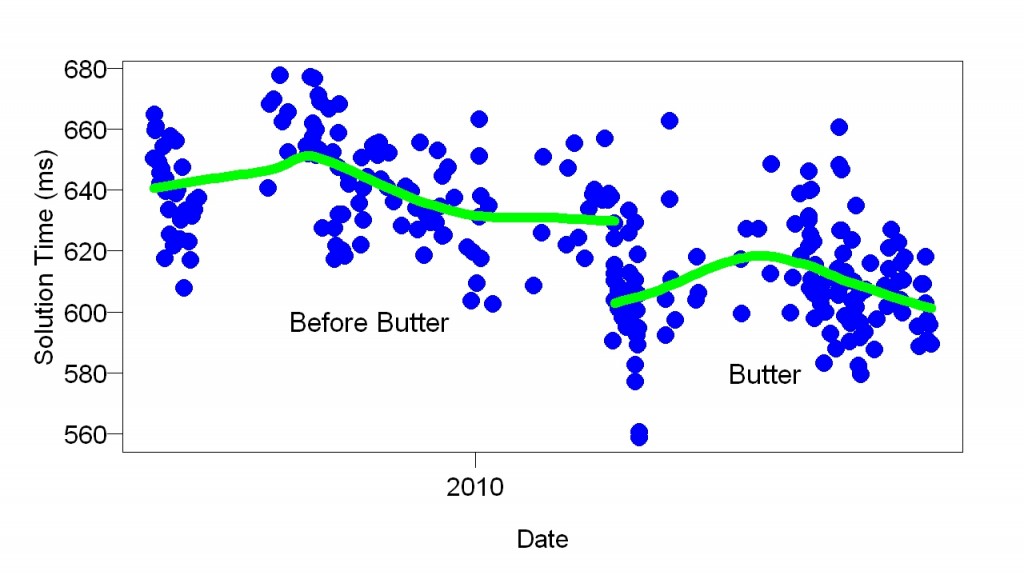 It shows how fast I did simple arithmetic problems (e.g., 2*0, 9-6, 7*9) before and after I started eating 1/2 stick (60 g) of butter every day. The x axis covers about a year. The butter produced a long-lasting improvement of about 30 msec. END_OF_DOCUMENT_TOKEN_TO_BE_REPLACED

I eat a lot of butter because I believe it makes my brain work better. A new paper says it may help me in other ways. From the abstract:

Compared with those with the lowest intake of full-fat dairy [= “whole milk, cream, ice cream, yogurt, full-fat cheese and custard”], participants with the highest intake (median intake 339 g/day) had reduced death due to CVD (HR: 0.31; 95% confidence interval (CI): 0.12â€“0.79; P for trend = 0.04) after adjustment for calcium intake and other confounders.

70% reduction is huge — so large it makes the idea of direct causation (butterfat lowers CVD risk) more plausible. (However, there is a lot of uncertainty in the estimate.) The alternative is that butterfat intake is correlated with the true cause — a behavior difference, say. But that correlation would have to be very high, which isn’t terribly plausible. Measured differences between the high-fat group and the low-fat group were small.

Stephan Guyenet reviews other evidence that supports the idea that this reduction is no fluke. Other studies have found similar effects.

Thanks to Paul Sas.

Ever since I found that pork fat improved my sleep, I’ve tried to eat a substantial amount every day. A few months ago, I knew I couldn’t eat any that day so I had a lot of butter at lunch (about 30 g). About 1-2 hours later, I felt in an unusually good mood — in particular, unusually calm. I hadn’t noticed such an effect with pork fat, perhaps because it is digested more slowly. (It’s easy to see that pork fat melts more slowly than butter.)

Now a friend has reported a similar effect:

My mood is better with the Straus butter, but I am concerned about my cholesterol, so maybe I’ll just use it when I feel depressed.Â  But it does work.

I’d guess that Straus Family Creamery butter, which is from grass-fed cows, has more omega-3 than other butter but I haven’t noticed mood elevation from flaxseed oil, so I doubt that’s involved. Moreover, I’ve always been drinking plenty of flaxseed oil so I doubt I’m omega-3 deficient.

Maybe this has something to do with why certain food is “comfort food”.

A new study found that consumption of unprocessed meat was not associated with more risk of heart disease but that consumption of processed meat (such as bacon) was associated with greater risk of heart disease. The whole American fear of animal fat (including butter) may be due to an unrecognized confounding: those who ate more animal fat also ate more bacon.

I asked Brent if he had any comments on his experience (after he adopted an ancestral diet, his migraines and sinus infections stopped). He wrote:

The quality of my life (mental + physical health) improved even further when I started eating slices of butter throughout the day awhile back. For awhile, I was using spoonfuls of coconut butter/coconut oil and/or Greek yogurt for this satiation role, but once I added butter slices to the mix, I beefed up my nutritional ‘bag of tricks’ quite a bit. Of course, I had cooked in butter for a few years, but I never made the link to simply eat it in slices, despite enjoying its taste so much. And, a little bit goes a long way. I eat cultured butter from a few different brands and a few different locations of the world (hoping this diversification may carry extra beneficial side-effects: different strains of micro-organisms, etc.). I try to find brands that are pastured too (more naturally-occurring Omega-3’s, evidently). I usually suck on/chew on the butter slowly because I’ve found this has improved my oral health too: animal lipids (plus coconut oil) are good for epithelial tissue health (that’s why I rub coconut oil on my face and skin and rub butter, coconut oil, and yogurt on my hands). Pairing butter and coffee (I eat the butter; I don’t put it in my coffee; I drink my coffee black) has become a nice start to my day (Dave Lull even found a study speculating on the benefits of coupling hyperlipidity and anti-oxidants together in this way; I think it’s also a useful approach to detoxifying the liver), particularly when I know I am going to workout that morning–this little hyperlipidity kick seems to help in the gym too (when I am not fasting). Using butter slices in this manner is a nice compliment to fasting intermittently–these two practices allow me to enjoy low-caloric intake periods pleasantly. They set up my “feasts” nicely. Whenever I have a “grumbling” stomach, or I feel a “biting” sensation in my stomach, I eat a small piece of butter, and my mood and body tend to stabilize. And, like bacon and yogurt and eggs, it’s cheap. Butter has certainly been an excellent ‘cheap health option’ for me.

Now I am working intently on Meta-Rules. Meta-Rules are simply ‘rules for making rules’ to live by. Three dynamics concern me deeply: (1) The problem of induction; (2) biochemical individuality; and, (3) factoring for the unseen. For instance, one of my nutritional Meta-Rules is: “Don’t consume anything that causes a negative physiological reaction.” From this Meta-Rule, I have deduced the following rule to live by (as one example): “Don’t consume high-fructose corn syrup.” A marker for monitoring this rule could be facial inflammation and ‘puffiness’ post-consumption, as one possibility. That’s an example of a higher-level precept empowering an individual to deduce for him or herself how that concept applies (or does not apply) in his/her own specific case (I like the term: Patient of One). Over time, I suspect that something like William Baines’ Biomedical Mutual Organization (BMO) could emerge if enough people were self-experimenting with Meta-Rules and interacting about their experiences and results. Amongst this cohort of parallel n=1 clinical trials, some convergence of Meta-Rules may occur, indicating ways that our bodies are the same, and also showing how our bodies differ individually when it comes to things like diet, exercise, and lifestyle design.

To explain why headaches can be due to inflammation, he pointed me to this.

When Marion Jones, the Olympic athlete, was in prison, “several inmates befriended her and showed her . . . how to hide sticks of butter.” Just as others carry water bottles so they can drink throughout the day, I carry butter in my backpack in a jar so I can eat small amounts throughout the day. As far as I know, no one else does this. I value butter so much because it makes my brain work better. If anyone reading this knows why inmates value butter so much, please let me know.

Previously on Seth’s Blog: A few weeks ago, during a brief test, I did simple arithmetic (e.g., 3+8, 4*0) substantially faster than usual. The next day, under the same conditions, it happened again. I thought of four possible reasons for the improvement:

I guessed it was the walking.

The results so far suggest, to my surprise, that two of the four factors helped: butter and standing. How wrong I was!
At Berkeley, one of my students did a self-experiment that compared different ways of studying. She measured how long she stayed awake while studying foreign vocabulary. Worst turned out to be the conventional way: sitting at her desk in silence. Best was lying on her bed listening to hard rock. My new results are sort of a bigger version of the same thing: conventionally we avoid butter and sit while doing intellectual work.

Yesterday I blogged about a sudden improvement in how fast I could do arithmetic. The improvement was much larger than normal variation and happened after I did four things that I rarely did. In chronological order:

2. Stood on a cobblestone mat (for 5 minutes, which was all I could bear).

3. Stood during the test.

4. Walked for 10 minutes just before the test.

To find out which mattered, I did them again in the same order and at the same times of day, but with tests before and after each one.Â  If performance suddenly improved after one of them, then I’d know.

Before doing these tests, my best guess about what caused the improvement was the walking. But the scores were improving before the walking so that’s unlikely. Perhaps the walking was one of several factors that helped. The data suggest, if anything, a shocking conclusion: butter made my brain work better. An alternative, less consistent with Occam’s razor, is that butter, standing, and walking all produced smaller improvements, which together added up to the big improvement. The cobblestones produced a short-lived decrement.

That pork fat improved my sleep obviously supports the butter interpretation. I should be less surprised than anyone else, but still . . . Last week I noticed something else that supports the butter explanation. At a restaurant with a friend, the waiter brought bread and olive oil. I asked for butter. I spread all of it on a piece of bread, then asked for more butter, and spread all of that on another piece of bread. (About 30 g butter total.) It was the first time I’d eaten a large amount of butter at a meal. An hour or so later, I felt unusually good, some combination of calm and warmth. I never noticed this after eating pork fat, but butter may be to pork fat as hamburger is to steak: Easier to digest. The pork fat is within cell walls; the butter fat isn’t.