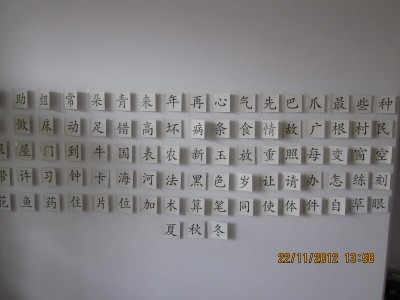 Two years ago I taped a bunch of Chinese flash cards (Chinese character on one side, English meaning on the other) to my living room wall (shown above). I’ll study them in off moments, I thought. I didn’t. It was embarrassing when guests pointed to a card and said, “What’s that?” But not embarrassing enough.

A few weeks ago, I can’t remember why, I decided to test myself: how many do I know? About 20%. I’ll try to learn more, I thought. I was astonished how fast I learned the rest. It took little time and almost no effort. I didn’t need “study sessions”. I glanced at the array now and then, looked for cards I didn’t know yet, and flipped them to find out the answer. After a few days I knew all of them.

I had been using conventional methods (flash cards studied in ordinary ways, Anki, Skritter) and an unconventional method (treadmill study) to learn this material for years. In spite of spending more than a hundred hours on each method, I had never gotten very far. I might get to 500 characters and backslide due to lack of study. Treadmill walking while studying made studying much more pleasant, but I found I would still prefer to watch TV rather than study Chinese. Maybe part of the problem was too many days skipped. After you skip four days, for example, you have a discouragingly large number of cards to review. Plainly these methods work for others. They didn’t work for me.

After my success with the two-year-old cards, I put up another array (8 x 13). I already knew about 40% of them. I learned the rest in a day or so. Then I put up a 10 x 12 array. I tested myself on them one morning. I knew 30 of them. I studied them during the day for maybe 30 minutes in little pieces throughout the day. The next morning I tested myself again (about 12 hours from the last time I had studied them). Now I knew 105 — I had learned 75 in one day, almost effortlessly. That day I studied for a few minutes. The next morning I tested myself again. Now I knew all but one of them.

I did not notice any facilitation of learning when I studied flash cards while walking around. In that case, unlike this one, (a) they were in roughly the same position relative to my body and (b) had no consistent physical location. I noticed the same facilitation of learning during a Chinese lesson in a cafe. I was having trouble remembering three Chinese words (e.g., the Chinese word that means graduate). I wrote each of them on a piece of paper with the English on one side and the Chinese on the other. I put the three pieces of paper at widely-separated places on the table. I studied them briefly, a few seconds each. That was enough. Five days later I still remember them (having used them a few times since then).  This happened in a place (a cafe) with which I wasn’t familiar, unlike my living room. Maybe the general principle will be it is much easier to learn an association if it is in a new place.

It’s very early in my use of this method, but I doubt it’s a fluke. It connects with several things we (= psychology professors) already know. 1. The mnemonic device called the method of loci. You put things you want to learn in different places in a well-remembered landscape (e.g. different places in a building you know well). Usually the method is used to learn lists, such as the digits of pi or the order of cards in a deck. You place different items in the list in different places in the imagined place. Then you “walk” (in your imagination) through the imagined place. The method dates back to ancient Rome. 2. The power of interference. Thousands of experiments have shown that learning X makes it harder to learn similar Y. X and Y might be two lists, for example. The greater the similarity, the bigger the effect. What you learn on Monday makes it harder to learn stuff on Tuesday (proactive interference); what you learn on Tuesday makes it harder to remember what you learned on Monday (retroactive interference).  To anyone familiar with these experiments, my discovery has a simple “explanation”: spatial interference. 3. Evolutionary plausibility. The study of printed materials (e.g., books) is so recent it is hard to imagine our brain has evolved to make it easy.  In contrast, thousands and millions of years ago we had to learn about things in different places. Learning about food and danger in different places was especially important. When language arrived, the necessary learning (at first, attaching names to objects) is quite similar to my learning because the named objects were in different places. The study of vitamins and to some extent my work (especially the power of morning faces) show how hard it can be to figure out what we need for our brains and bodies to work well. How non-intuitive the answers may be.