One day in 2009, I ate a large amount of pork belly (very high in fat — pork belly is the cut used to make bacon). That night I slept an unusually long time. The next day I had more energy than usual. This led me to do an experiment in which I ate a pork belly meal (with lots of pork belly, about 250 g) on some days but not others. I compared my sleep after the two sorts of days. I kept constant the number of one-legged stands I did each day because that has an effect. During the first half of the experiment I kept this constant at 4; during the second half, at 2. I originally posted the results only from the first half. 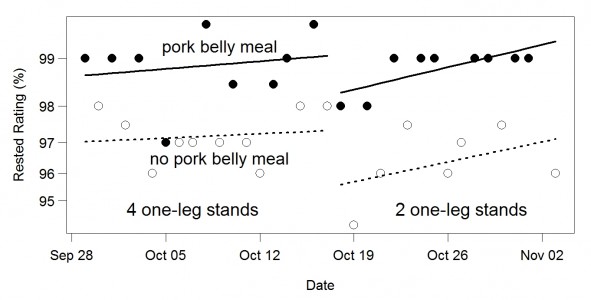 The two halves were essentially the same: pork belly produced a big improvement.  Here are the results for sleep duration. 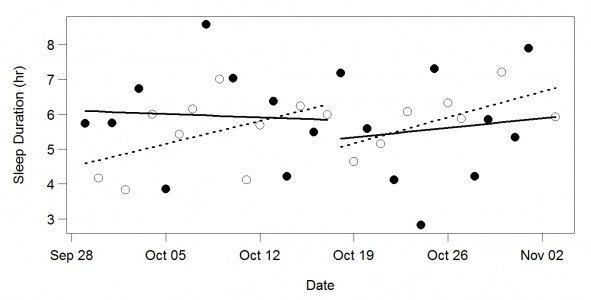 No clear effect of pork belly in either half of the experiment.

The main thing I learned was that pork fat really helps. The effect is remarkably clear. With micronutrients, such as Vitamin C, the body has considerable storage. It may take months without the nutrient to become noticeably deficient. With omega-3, which is between a micronutrient and a macronutrient, my experiments found that it takes about two  days to start to see deficiency. With pork fat there seems to be no storage at all. I needed to eat lots of pork fat every day to get the best sleep. That repletion and depletion are fast made this experiment easy. How curious we are so often told animal fat is bad when an easy experiment shows it is good, at least for me.

22 Replies to “More About Pork Fat and Sleep”