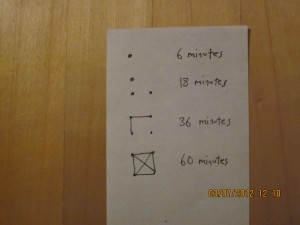 I devised this. It is based on an effect discovered by Allen Neuringer and Shin-Ho Chung called quasi-reinforcement. Neuringer and Chung studied pigeons. They found that if you give a pigeon food every 500 times it pecks a key, it will peck the key slowly (say, 2 pecks/minute). If you give the pigeon a brief flash of light every 20 pecks — a marker that shows it is doing the right thing to get food — it will peck much faster (say, 4 pecks/minute). The flashes of light are quasi-reinforcement, said Neuringer and Chung — they have some but not all of the properties of ordinary reinforcement, such as food. By themselves, the flashes of light don’t interest the pigeon. It won’t peck a key to get them. The amazing thing about this effect is that it doubles how hard the pigeon works without raising its salary.

I noticed improvement — it was easier to write — within about 20 minutes the first time I tried this. I chose six minutes as the unit because shorter times were more distracting and longer times less effective.

I told Gary Wolf about the dots method two years ago and he’s been using it ever since. He says it is good for getting started on something he needs to write. After he gets going, he stops doing it. He uses it as an example of the value of self-tracking. I too find that after I get going on something, I need it less. If I stop, however, I drift backwards toward doing less productive stuff or nothing.

Gary asked me about this a month ago and I started doing it again (instead of percentile feedback). I noticed something I had never noticed before, which was that the system lifted my whole energy level and gave me a “can’t wait to get started” feeling in the morning. This too made it easier to get stuff done. It reminded me of some rat research I’d done. Put a rat in a Skinner box and it will explore for a while. If it doesn’t get any food,  after a while (10 minutes?) it will stop exploring and curl up in the middle of the box. However, if I give the rat a pellet of food at random times (at the rate of one pellet/minute), it will keep exploring the box indefinitely. Learning psychologists have emphasized that when you reward an action, you make it more likely. The rat experiment I just described suggests a second effect: when you give reward — at least, when reward is rare — you make all actions more likely. You increase exploration, not just the rewarded response. When I was a young professor I went to a two-week neuroscience program at Dartmouth. It was all lectures. The other attendees were graduate students. I had little in common with them. There was little to do in the town, besides eat Ben & Jerry’s. The next town was 8 miles away. I couldn’t find anything I enjoyed doing. After a week, I had trouble getting out of bed, like the rat curled up in the middle of the Skinner box. A psychiatrist might have said I had major depression. I flew home and was fine.