More: Greg used Kerrygold butter in the results given below. I now see that he omitted data from other butters that did not agree with his conclusions. This makes his results considerably more doubtful and his whole post (in which Kerrygold butter is called “butter”) misleading. I have changed the title of this post to reflect this.

A New York lawyer named Greg reports remarkably clear evidence about the effect of butter on blood lipid levels: It improved them. For a few years he measured his HDL and LDL regularly with a home cholesterol device. For unrelated reasons, he started eating more butter. He ate a half stick (about 60 g)/day, like me. Here’s what happened. 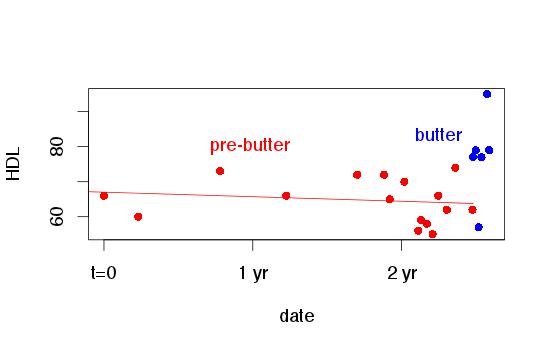 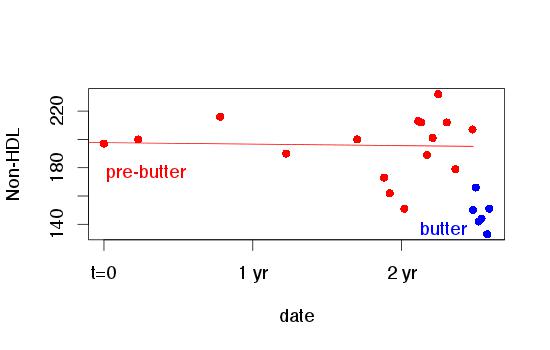 The first five measurements are from lab tests. The rest are from his home machine.

I asked Greg for details.

I’m 36. I bought the cholesterol meter last July after my doctor said he couldn’t figure out why my numbers were a bit high. We both agreed it was not something to worry too much about and that there was no point charging my insurance company for a VAP test every 6 months. We both also agreed that going on a statin was a bad idea. I picked up the meter out of curiosity. I had previously been monitoring my blood sugar (since 2009) and found it to be very interesting, so I thought I could have some fun with the numbers. The result is all the more surprising because I did not expect it. I was tracking my numbers around the time of the experiment [with butter] to make sure they did not go the wrong way like everyone says they should.

The machine is a CardioChek PA [about $600], which is designed for use in doctors offices, not for the consumer market. The device is “CLIA-waived”, which means that the FDA considers it so simple that the user does not need any special training in clinical chemistry (home glucometers fall into the same category). The machine gives significantly different numbers for different people, suggesting it is measuring something real and not spitting out random numbers.

I asked what the reaction to this data has been.

Most people I’ve spoken to have been receptive to the idea [that butter improves blood lipids], but I got no sense that they would be willing to try it for themselves. Most people I know seem to be quite willing to accept the fact that the old stories about cholesterol are not true. In contrast, one conservative cardiologist said I must have “unique genetics”.

5 Replies to “Does Kerrygold Butter Improve HDL and LDL?”