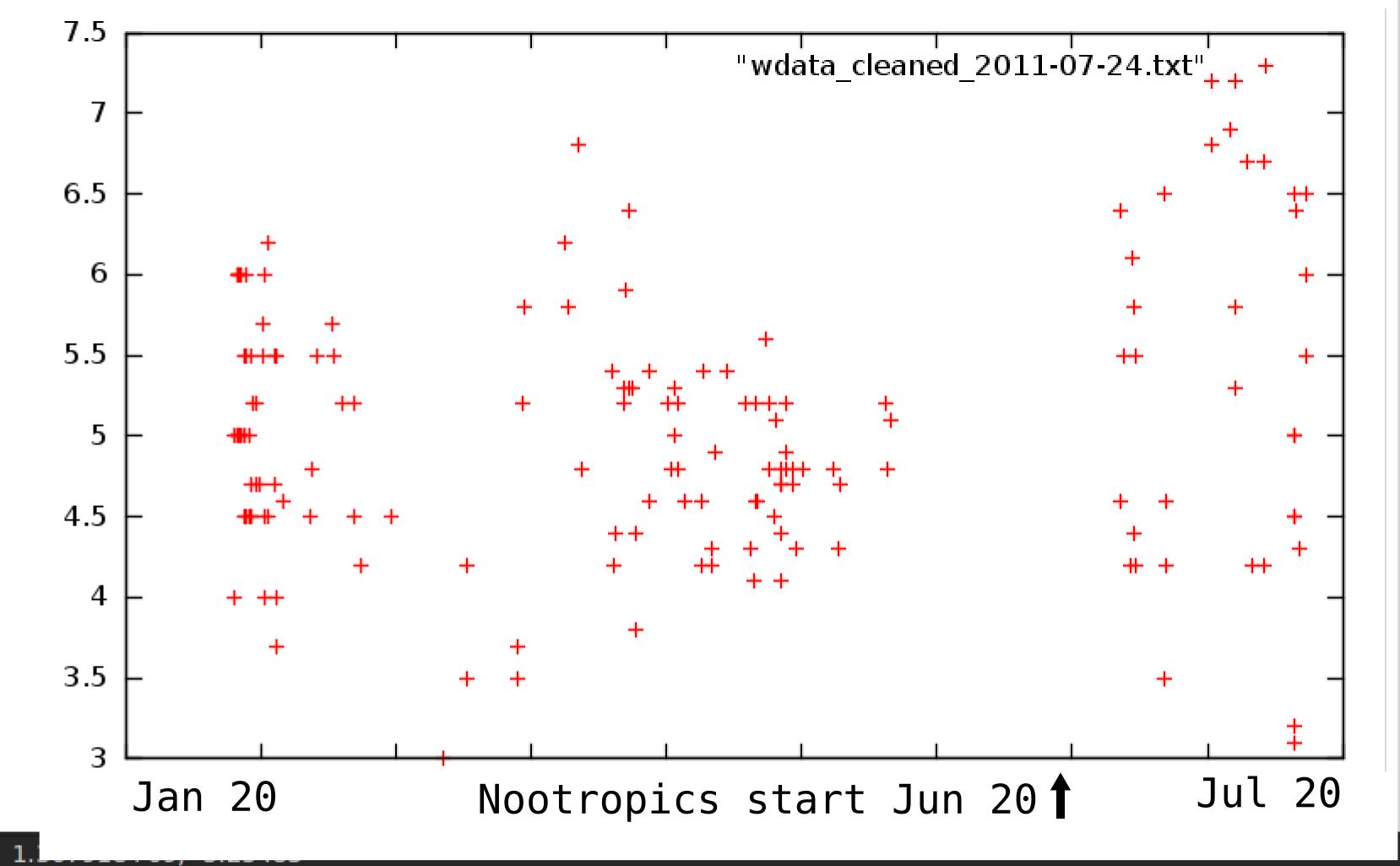 At the recent Quantified Self Meetup in Mountain View, Fenn Lipkowitz told me that he had started taking a long list of supplements and now felt much better. At last week’s QS Silicon Valley Meetup, he gave a talk about it. The graph above shows “wellness” ratings before and after the change. Here’s what the scale numbers mean:

3 = “i’m hurting, i just want to crawl under my blanket and suffer for a few hours.”
4 = “today sucks, i think i’ll hide and eat some chocolate and read manga.”
5 = “well, i’m here and dont have any excuses, so i guess i’ll go do something.”
6 = “bright eyed and bushy tailed, ready to go do some work”
7 = “why am i writing in my log, i should be out dancing!”
8 = “holy shit, tearing it up, backflipping over ninjas and juggling fire”

Things seem really easy now that were serious barriers before. I now sleep 4-6 hours a night instead of 12, and bounce out of bed. I no longer have high dance inertia, I can just start dancing on demand. I can type 143 works per minute vs my maximum of 92 wpm a month ago.

Every morning he takes:

Here are his explanations for some of these:

vinpocetine – vasodilator derived from periwinkle plant. enhances focus, seems to improve long range vision, seems to cause your eyes to fixate more steadily on what you’re looking at, less saccades.

piracetam – increases communication between two halves of brain; the effects of this vary by person depending on which half of their brain is in control. for me it makes interpersonal relations become more clear, easier to cooperate and understand the motivations and intentions of others. also uses up choline at a faster rate, which is why i also take

alpha-gpc – a high bioavailability form of choline precursor, which is in the form that cells usually generate when they’re self-scavenging in choline-depletion state. it doesn’t go into rebuilding the cell walls, but is used for synthesis of acetylcholine, a neurotransmitter involved in memory and muscle control.

choline-bitartrate – choline is transformed into phosphatidyl choline in order to (re)build cell membranes. this is low oral availability (doesn’t cross blood/brain barrier easily?) but super cheap and tastes good. i have a theory that alzheimers is caused mostly by long-term choline deficiency.

dmae – another choline precursor? aka “deanol” and has been shown to increase the life-span of mice by 50%, possibly through the mechanism of clearing out lipofuscin deposits. cheap, tastes good.

boswellia – no idea, it’s in the cucurmin pills; somewhat aromatic and pungent, like tea tree oil or piperazine.

curcumin – this is straight up turmeric extract. antioxidant and various other bodily health effects.

cordyceps extract – zombie ant brain fungus. look up images of it online, it’s sick. it makes you want to climb up to the top leaf in a tree, clamp your mandibles, and explode spores everywhere. well, not really. but it improves oxygenation, energy, and will kill a viral infection in one day. the extract is prepared by rapidly growing a lot of cordyceps mycelia in a warm fermenter and spray drying the liquid that comes off. this is highly unnatural environment

aloha cordyceps – aloha pharmaceuticals saw the explosion in “farmed” cordyceps and decided it wasn’t natural enough or something, so they recreated the mushroom’s natural environment of tibetan steppes. they grow it up fast and then let it sit for months in the dark in refrigerators with low oxygen. they claim that their process increases the number of good chemicals (cordycepin, uracil, based on HPLC analysis) and reduces the gross things. i can confirm it tastes/smells much better than swanson brand cordyceps extract. i started taking regular cordyceps extract first and can confirm it works as advertised, but maybe aloha is better, so i take that too. i have a friend taking only aloha cordyceps so we’ll see what happens.

8 Replies to “Many Supplements Taken Together Reduce Depression/Dysthymia”