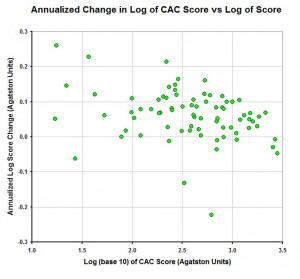 In 2009, I had a heart scan — a three-dimensional X-ray. The scan was used to calculate an Agatston score, a measure of arterial plaque. Higher scores mean a higher risk of heart attack. A few months after that, I discovered that butter improves how fast I do arithmetic.

Because butter was good for my brain, I started eating half a stick of butter (66 g) every day. Surely the butter was improving overall brain function. The effect of butter on the rest of my body I didn’t know. However, I thought it was highly unlikely that a food that greatly improves brain function is going to damage the rest of the body. The food you eat, after digestion, goes to the whole body (leaving aside the blood-brain barrier). Every part of the body must have been optimized to work well with the same food.

As I have posted earlier, I had a second heart scan, producing a second Agatston score, about a year after the first one. Amazingly, the second score was better (lower) than the first score. The woman in charge of the testing center said this was very rare — about 1 time in 100. The usual annual increase is about 20 percent.

Now I have gotten more information about the annual rate of change in Agatston scores. The graph above (thanks to Harry Rood) shows data from 40 people who listed their scores at the Track Your Plaque site. It is based on pairs of consecutive scores: it plots change versus level (average?). Because some people provided more than two scores, the data allowed 77 points to be plotted. My two scores were 38 (log 38 = 1.58) and 29 (log 29 = 1.46). So the decrease in log units was 0.12. If you look at the graph, you can see what an outlier this is — as I was told, it really is about 1 in 100.

Here we have the conjunction of two unusual things: 1. Eating half a stick of butter per day. Almost no one eats so much butter. 2. An extremely rare drop in the Agatston score over the same period. A principle of reasoning called Reichenbach’s Common Cause Principle says if two rare events might reflect cause and effect, they probably do. You can think of it like this: Lighting doesn’t strike twice in one place for two different reasons. Indeed, there is other evidence that high levels of saturated fat cause heart-scan improvement (even though this contradicts everything you’ve been told). Mozzafarian et al. (2004) found that in postmenopausal women, “a greater saturated fat intake is associated with less progression of coronary atherosclerosis.” So it is quite plausible that my butter intake improved my Agatston score.

22 Replies to “How Rare My Heart Scan Improvement?”