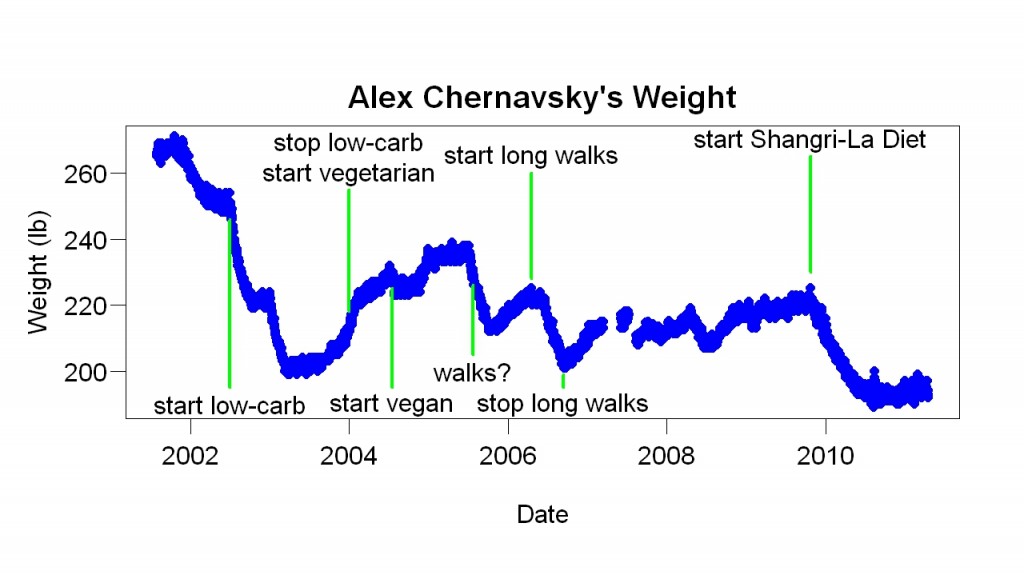 For ten years Alex Chernavsky has measured and recorded his weight (above). I asked what he learned from this. Here’s what he said:

I started the tracking because I thought that the very act of measuring (and recording) my weight every day would inspire me to lose weight. I don’t think it really worked that way, though. In order to lose weight, I had to take active measures.

What did I learn? I learned that low-carb diets work well in the short-run (as you said), and I also learned that eating low-carb is far, far easier than eating a calorie-restricted diet (which I’ve tried in the past, before I began recording my weight daily). I learned that regular exercise does lead to weight loss, although I can’t rule out a possible confounding factor: I wouldn’t be surprised if it turned out that I changed my eating habits at the same time that I started an exercise regime. That’s probably what Gary Taubes would claim.

I also learned that the Shangr-La diet works well for me. I think that the current upward trend is caused (at least in part) by the fact that I’m eating breakfast more and more often. I didn’t start eating breakfast until sometime last autumn. I will try eliminating breakfast again to see if it reverses the trend. I must say, though, that it’s a little difficult to watch my wife eating some scrumptious morning meal while I just drink coffee. The temptation is hard to resist.

I also learned that my weight fluctuates for no apparent reason at all. If you look at the period of roughly April 20, 2008 through mid-July 2008, you’ll see a drop of about ten pounds. I remember being surprised and puzzled during this time, because I could not think of any plausible reason why this weight loss would occur. I still don’t know. In any case, it was short-lived.

I also learned that I should have kept much better notes about what was going on during those ten years. I’m kicking myself now. I plan on continuing to collect data, and I will try to annotate the data better in the future.

3 Replies to “10 Years of Weight Measurements: What Was Learned”